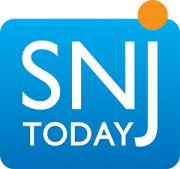 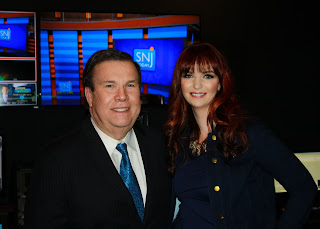 Award winning singer-songwriter and Billboard charting adult contemporary recording artist Doreen Taylor stopped by the SNJ Today studios to chat about her hit single "TOY", her upcoming live performances for the Boys & Girls Club of America and Leukemia & Lymphoma Society (LLS), writing and recording her new album, and so much more...

Posted by Unknown at 6:03 PM No comments:

Doreen Taylor Featured In 'Out on the Town' Magazine 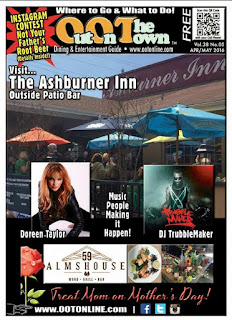 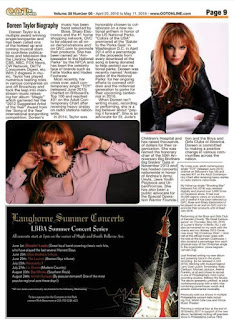 The magazine is available at select venues in the Greater Delaware Valley as well online. 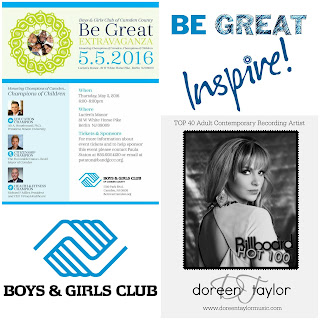 Billboard's Hot 100 Adult Contemporary recording artist, Doreen Taylor will be honored with the Inspiration Award from the Boys & Girls Club of Camden Country at the Be Great Extravaganza on Thursday, May 5th, 2016 at Lucien's Manor in Berlin, New Jersey.

Taylor was selected for this great achievement because of her hit 2016 holiday single "My Christmas Wish" which she not only raised money for the organization through sales of her single but, also filmed the official music video at the East Camden Clubhouse with many of the children that benefit from the Boys & Girls Clubs of America.

"Being selected to receive the 2016 Inspiration Award from the Boys & Girls Club of Camden County is such an incredible honor for me." Taylor said. "I have worked so hard to help so many children throughout my career and I am truly thankful to see that effort and dedication is paying off. Perhaps I can inspire others to also help and make a difference in their communities."

Doreen will also be performing a moving musical tribute at the 2016 Be Great Event after she receives her award. Other award recipients are notables from the Philadelphia area; the Mayor of Camden, Dana L. Redd (Citizenship Award), President of Rowan University, Ali A. Houshmand (Education Award) and President & CEO of Virtua Heathcare, Richard P. Miller (Heath & Fitness Award) 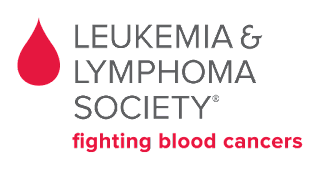 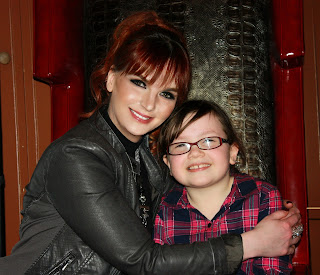 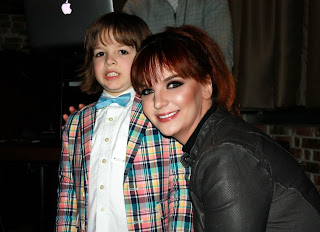 The Eastern Pennsylvania Chapter of The Leukemia & Lymphoma Society (LLS) has announced that top 40 recording artist Doreen Taylor will perform at the organization’s prestigious 2016 Man & Woman of the Year Grand Finale Celebration at the Lowes Hotel Philadelphia on Friday, June 10th, 2016.

Doreen Taylor will be performing a special musical tribute in honor of two patient heroes, the 2016 Boy and Girl of the Year: Garrett and Savanah who are both cancer survivors. Fifteen candidates have set a goal of raising $500,000 during their 10-week campaign in honor of Garrett and Savannah and have a mission of not only raising funds for lifesaving blood cancer research, but also raising awareness for LLS’s mission: to cure leukemia, lymphoma and myeloma, and to improve the quality of life for patients and their families.

“Doreen has personally known the devastation of losing more than one person in her life to a blood cancer and is very passionate about helping find a cure to wipe out this epidemic. We are thrilled that Doreen Taylor has chosen to not only give her time and enormous talent, but her love and support to LLS. We are so excited to have her perform at our 2016 Man & Woman of the Year Grand Finale Celebration!” said LLS Senior Campaign Manager, Sarah Langevin Hopkins.

To learn more about LLS’s Man & Woman of the Year campaign, contact the Eastern Pennsylvania office at 800.482.2873 or visit www.mwoy.org/epa or for more info on sponsorship or ticket purchase, please visit http://www.mwoy.org/pages/epa/philly16