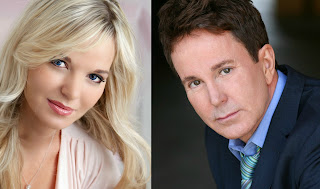 Fresh from the sold-out premiere at the Bristol Riverside Theatre in Philadelphia, the brand new, innovative "docu-musical" AN ENCHANTED EVENING: A NIGHT WITH OSCAR HAMMERSTEIN II is coming Off-Broadway for a limited December 2017 engagement.

After receiving critical acclaim in its Philadelphia debut, this cutting edge, 90-minute "docu-musical" highlights Oscar's evolution to become one of the most important lyricists of all time. Possessing a rare opportunity to work closely with William Hammerstein (Oscar Hammerstein's grandson) to obtain private, personal stories, rarely before seen images and videos, and an in-depth glimpse into the life of Oscar Hammerstein, "An Enchanted Evening" is a one-of-a kind, intimate show highlighting Oscar's life and music through documentary story-telling and imaginative performances.

Will Hammerstein has proudly embraced this new production and is thrilled at the docu-musical's success of highlighting the honorable values and principles of which his grandfather embodied. "Doreen's talent and personal values make her a perfect torchbearer for this exemplary legacy [Oscar Hammerstein II]. I'm sure Oscar would be very pleased with the association."

Being able to return to her musical theatre roots in her home state of NY while supporting a cause that helps save a historic Broadway landmark makes this evening an extra special achievement for Doreen.

"I grew up performing in the great shows that Oscar Hammerstein II helped create and to think that the very place these shows were conceived is now being threatened is a travesty. I created this show from a very special place in my heart and as a labor of love. I revere Oscar and will always be grateful for forever changing the landscape of musical theatre history and being able to help save this legendary landmark is a great honor for me."